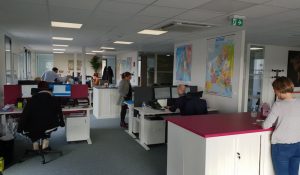 Following the model of the group’s head office in Le Mans, which has 250m² of office space, a 350m² warehouse, and three bays to accommodate NTL France’s trailers, the Nantes Agency is now equipped to the very highest levels. The installation of these new facilities is fully in line with ED-TRANS’s strategic thrust and its five sites across France.